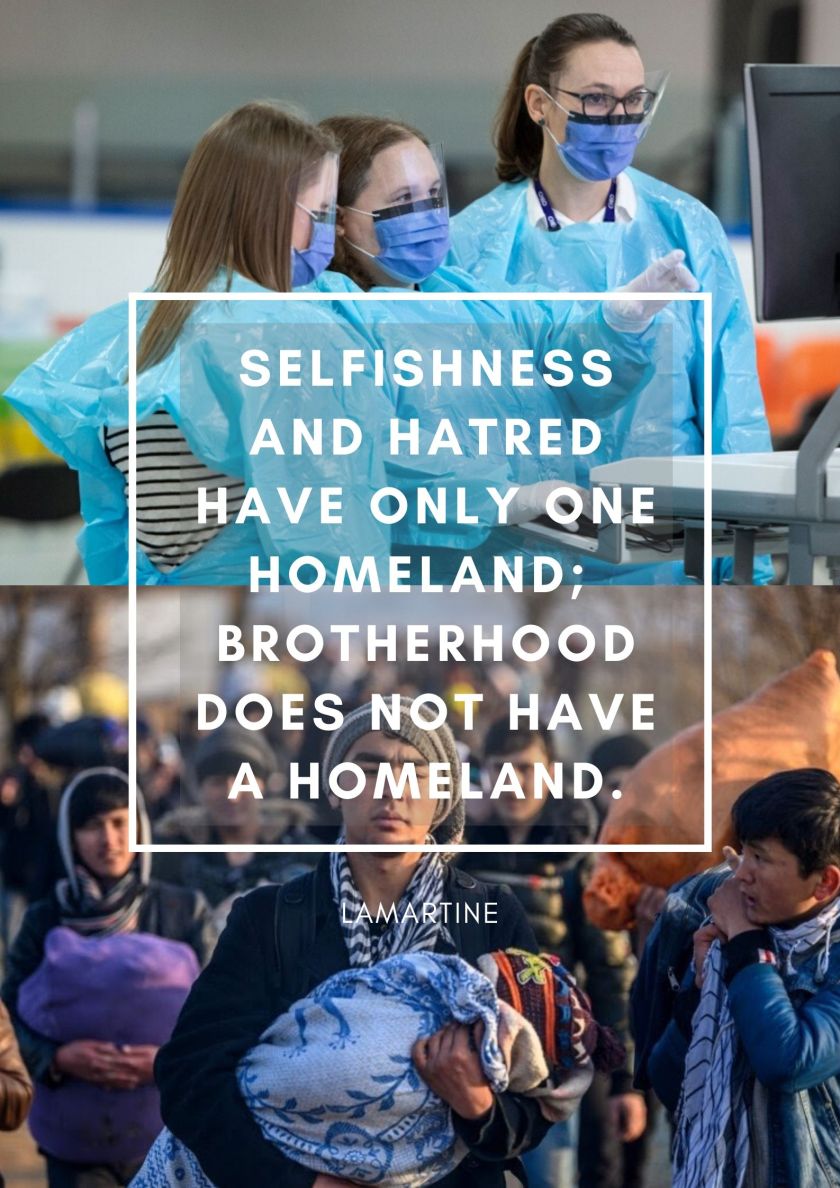 In addition to the medical and socio-political consequences now on our horizons, the pandemic caused by Coronavirus is also going to be a challenge for our own sense of humanity. Amidst our fears of being contaminated ourselves and the anguish of seeing those dearest to us also affected, will we still be able to treat others as part of the same humanity as ourselves? And will we, in consequence, have the time and space not only for our own problems but also to be moved by, for example, the fate of the refugees who will now inevitably disappear from the pages of the newspapers we read or the news programmes we see or hear?

Yet, in the midst of our own fears and anxieties, we should recall that here is a literary  premonition of what could happen. Albert Camus’s novel, The Plague, describes what happens when a deadly epidemic contaminates a city, the Algerian city of Oran.  The city is locked down and quarantine camps are erected, but the book’s hero, Bernard Rieux, a doctor, fights professionally against the epidemic but also seeks to affirm the moral values of solidarity and common humanity within a colonial environment.  He denounces those who have come to see “the other” as the evil symbolized by the epidemic, the environmental threat, the “foreigner” who should be slaughtered.

For Rieux, resistance and indignation are the way to bring human beings together and to bring out “what they have in common: love, suffering and exile”.  Of course, written, as it was, in the middle of World War II, this work was also an allegory of resistance against the plague of fascism that did contaminate so many but, as a passionate argument for the recognition of our common humanity, it parallels our current crisis.

President Trump, in classifying Codiv-19 as a “foreign virus”, as he announced the closure of America’s borders to Europe, adopted the ideologies that have always marked his presidency: xenophobia, racism and nationalism. They are typified by the racism which, like the Coronavirus, has recently spread throughout the world. In its latest manifestation, it has legitimised attacks against Chinese and Asians, seen by advocates of white supremacy as the new ‘yellow danger’.

Unfortunately, Europe is not immune to this virus of inhumanity – the fear and hatred of the ‘other’ who is seen simply as the bearer of evil. They are, for example the refugees treated as hostile threats on the border between Greece and Turkey, where the government in Athens has been supported by the institutions of the European Union, letting Greece construct a ‘Guantanamo’ for refugees – a detention centre where law no longer applies, according to the New York Times.  These are events that are symptoms of the trivialization of xenophobia, a reminder of the banality of evil.

Yet, at a time when the citizens of the Union and their governments are doing all they can to combat the pandemic, when our attention is focused on preserving the health of our populations, it would not be inappropriate if we thought about what democracies and the European Union will be like after the crisis, however long it may last.  If the European Union tears itself apart as a result, it will not be because Coronavirus has caused a new financial crisis, but because it has undermined one of the fundamental values on which the Union was based – fraternity.

The futures before us

Yet through our brotherhood with those infected by the virus, through the care that everyone must take to support their neighbour, through our awareness that our health services will be essential to our survival, we can rediscover our humanity. But it will be a fraternity that is unconditional and will be directed towards all of us, irrespective of race or creed. It is a fraternity that cannot be denied to those who live in fear of disease or who flee war, because they are all victims of crises that threaten to overcome them.

Many Europeans were justifiably outraged by being transformed into no more than a foreign virus by President Trump’s offensive rhetoric.  It would be helpful, however, if they also found time to reflect on those facing repression on Europe’s borders.  They are, after all, the ones who have seen the boats that had borne them on their odysseys from danger and threat destroyed on the selfsame waters which had borne Ulysses, the embodiment of exile, eventually back to his home.

In reality, the world has no borders; not for viruses, for ideas, or for markets, still less for refugees.  It is an absurdity to believe that barbed wire and walls can ultimately impede their journeys or denying them solidarity will overcome the crises that we face.  President Trump may try to win elections with xenophobic rhetoric, Europeans may seek to isolate themselves from the evils of war at their borders, but they cannot prevent a consequence which would be the worst of  viruses,  one that would destroy our democracies.

It would be a consequence of the gravest possible concern to us for it would create a world that, in the twinkling of an eye, could be converted into a hostile environment, unable to guarantee us fundamental rights and freedoms even health.  That would remain one of the great anxieties of the 21st century, to replace the apocalyptic scenarios of the 20th century, of war. After World War II, movies like Nicholas Meyer’s “The Day After”, filled cinemas with the terror of the nuclear winter as our hecatomb.

Today, the apocalyptic scenarios for our future are no longer those of science fiction, but those sensationalised on television and social networks; humanitarian and environmental tragedies, natural disasters and, as now, pandemics. Yet, what will be decisive for our future survival will be our capacity to preserve our common humanity when confronted by them.  Rieux, at the end of The Plague, during the celebrations once the epidemic has been overcome, warns of other epidemics to come, and of the need to be prepared for them.  He points to the importance of writing a chronicle of the epidemic they have just survived because it would show that “there are more things in men to admire than to despise”. Today, when we see the sacrifices of so many in the fight against this pandemic, and of the voices raised in the midst of fear in defence of refugees, we can say that that is where our common future lies.